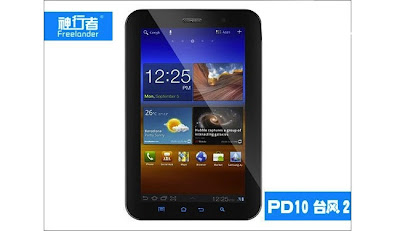 Since Freelander PD10 Typhoon tablet sells well, the manufacturer will release a new upgraded version of it at the end of May. There're some online revealed news and rumors already. Different from the former one, new Freelander Typhoon 2 will be equipped with MT6589 quad core, Android 4.1 system.

The front camera will get improved to be 2.0MP (Old Freelander PD10 Typhoon's front camera is 0.3MP.) The rest features remain the same as the former one, including 7 inch IPS 5 Points Capacitive Touch Screen, 1024*600 Pixel, 1G DDR RAM, 4GB ROM, Built-in 2G/3G Phone Call, FM Radio, Bluetooth, GPS and Wifi. About the retail price, no big changes by compared to the former one.