LG 42LA660S review - honestly I am getting real confused with the latest LG TV series, they released so many new models whit similar specs that sometimes it is quite hard to tell the differences.

We reviewed the LG 42LA640S which appeared to be one very good 42-inch 3D TV. But LG just thought that was not enough and released the LG 42LA660S which is 3D LED Smart TV of the same size but with some improved features and specs like the better refresh rate and micro pixel control (local dimming).

Design
LG 42LA660S is a very stylish looking TV, with design very similar to the cheaper LG 42LA640S. But there are few key differences between these two TV sets. The 42LA660S has thinner frame which is actually so small that you can tell there isn't a frame that surrounds the panel at all. LG decided to have the 42LA660S entirely in black just like most of their new premium TVs. 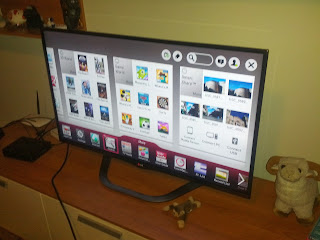 You can't and you shouldn't be expecting anything but the best quality from the LG 42LA660S TV. It offers amazing Full HD 1080p picture and a very good 3D experience thanks to the Cinema 3D and the Triple XD Engine, Resolution Upscaler, Smart Color Gradation, Dynamic Color Enhancer technologies which significantly improves the picture quality.

Plenty of Smart TV functions are available for the LG 42LA660S including open web browser, social apps and 3D World. All these are controlled quite easy with the Magic Motion remote control which offers variety of ways to control the different functions of the TV (with gesture, voice or few other ways).

Connecting the LG 42LA660S to the Internet is very easy thanks to the built-in WiFi adapter and the WiFi Direct function.

LG 42LA660S offers very good audio quality. It is equipped with two 12W premium speakers and subwoofer (two channel system) and thanks to clever technologies like the  Clear Voice II and the Virtual Surround Plus this TV performs exceptionally well in this category. Of course I don't even have to mention that you would be much better with any external sound system of $100 and above.

LG 42LA660S is not a cheap TV but it was never meant to be cheap. It is a fully equipped high-end 42-inch   3D LED Smart TV and its price of around $750 is pretty good for what this TV has to offer.
Probably the biggest competitor of the LG 42LA660S that I can think of right now is the Sony Bravia KDL-42W650 and probably the slightly smaller Samsung UE40F7000.