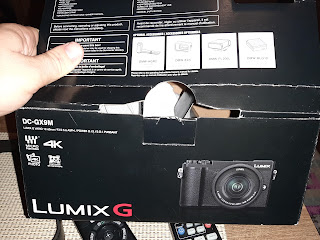 It has been couple of months since we are using the Panasonic Lumix DC-GX9 for our main photography tool for Test and Review consumer blog. We did a thorough research prior buying it and we didn't face any major surprises but there are things we want to share about it, after some 3 months user experience with the GX9.

Performance and Handling
Since it was released int 2018 the GX9 gained much popularity among street photographers due to its compact sizes, nice options for micro 3/4 lenses and awesome 20 megapixel sensor inside. The performance as you can guess is on a very good level. Note that Panasonic is using the same sensor in higher models like the more expensive G9.

So here are the things we did with the Lumix GX9 during these last couple of months:

Street photography
Of course that we took some awesome street photos with the GX9. This camera really comes alive being on the street. Our best examples came from Frankfurt where we also captured the 2019 Frankfurt Motor Show and at the Kapana Fest in Plovdiv where many people gather around small shops in the center of the city. Here are some example photos:


Back at the time we took these photos we used the kit 12-60 Lumix lens (not the Leica equivalent) that came with the camera when we first bought it. These lens are sharp at daylight but we wouldn't recommend it for dark conditions. Of course it is nice to have the vario at hand but we knew we need to invest in another lens.

That is when we bought the Panasonic Lumix G 42.5mm f/1.7 ASPH. POWER O.I.S. Lens which we believe are some of the best portrait micro four-thirds lens on the market. They are sharp, super compact and have a very nice bokeh effect.

Videos
Panasonic Lumix GX9 shoots 4k videos at 30 framers per second. Please note that this is not meant to be a video oriented camera but still one can make a very decent videos with the GX9. The in-built stabilization helps a lot, especially if you pair it with a stabilized lens when you get Dual IS effect, which is 5-axis in the compact GX9.

Actually this state of the art stabilization is what made us buy the Panasonic over the Sony Alpha A6400. With the GX9 it is much easier to use straight out of the box, without gimbels or other stabilizing accessories, something that is almost impossible with other compact mirrorless cameras.

Here is an example of a handheld video we shot with the Lumix GX9 earlier this year:
We also shot couple of corporate videos and they came out really well with professional grade picture but unfortunately moderate sound. One thing that we really hate about the GX9 is that it is lacking mic-out. Well, this can be easily compensated with external voice recorder which is a must for professional videos.

Lens
We are planing to invest in more lens in the next couple of months. Currently our targeted objects are the Panasonic Leica DG Summilux 15mm f/1.7 ASPH. for common day to day use and the Panasonic LUMIX G 100-300MM F/4-5.6 OIS II telephoto zoom lens.

Drawbacks / Downsides
As we already mentioned we kind of miss the mic-out and we really don't get why Panasonic decided to skip it in the GX9 (it is not a super-budget camera after all and was previously present in the GX series).  Here are few other drawbacks that you may consider before choosing this camera:


Accessories
We got the with kit lens and extra battery which was a nice starter pack. Soon after we bought a very nice Rivacase 7450 camera bag which is an amazing value for money bag and also very comfortable on the go.

Last week we also bought the Velbon VIDEOMATE 538 tripod which we have only test couple of times but no complaints so far. Soon we will post our first video taken with that one, hopefully it would come out crisp and smooth.

Well, that is most of our thoughts after using the Panasonic Lumix GX9 for couple of months. We should say we are pretty happy with its performance.


What are your thoughts and comments about this camera or the one you are currently using? We will be happy to hear your comments!
Tags:
camera camera review digital camera GX9 Lumix mirrorless Panasonic